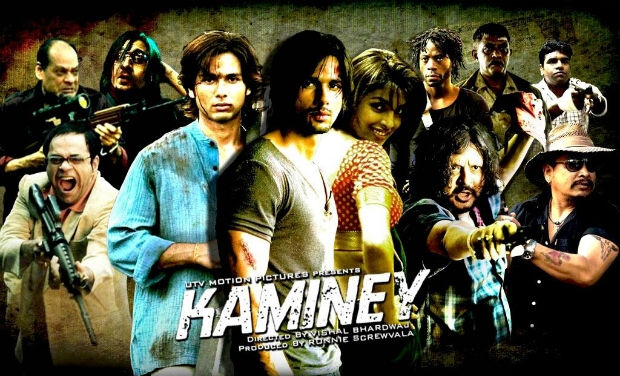 As i write and swap channels, there’s Tashan being shown on Sony. That reminded me to the last movie to come out of the YRF’s stable – the awful, Love Aaj Kal.
Kaminey is for the same class of audience as YRF targets; but with completely opposite brain balance. The film doesnt have as big cast, the Armani suits, European locales, yo generation themes and dialogues and no colourful dance numbers. Infact the first complaint against Kaminey would be the excess use of dark, whereas some of the scenes could have been shot under well lit rooms or mornings. The last complaint would be the use of hand held camera for 60% of the movie, which obviously isnt as stable and for audience who are seated in the first third of a theatre, can irk them.
Vishal should have factored the condition of most single screen theatres accross the country, and had he taken care of these two aspects, the film could have appealled small town viewers more.
In two lines, the story line is as cliched as some 80s movies – twin brothers, separated, opposite paths, multiple sets of villians, money and drugs, corrupt police, lots of fighting in climax, all villians die, twins unite and another pair is born. In 140 minutes, the story unfolds with breakneck pace in the bylanes of mumbai, with many threads joining along the way in 24hr period, a migrant issue highlighted, slick editing and intelligence. The last word is the essence to the movie. It compliments and respects that the average Indian viewer as an intelligent soul seeking to view a movie with a difference.
Shekhar Kapoor felt that Vishal could have done away with the Charlie’s f-&-s problem and Guddu’s stammers (both, the excellent Shahid Kapoor – who needed this movie to prove that JWM wasnt a one woman show). I have a contrary view – cause it contributed a lot to the humour – the real dark humour, the other strength of the movie. As the scenes got violent, tense; so would the levels of humour, which made the viewing pleasurable.
The lingo, which borders on the way the average pedestrian talks and hence connects well at key moments.Of the cast, there is decent screen time given to most and all of them border between good to excellent.
The music is good and meaningful with the icing being “Dhan Te Tan”. Its a movie which would need multiple viewings to grasp its details to the extent that once can sit over an exam. But rest assurred, each of the viewings would be a pleasurable journey. This year had around four months with no movies released (unless you are counting Kambakht Ishq as a movie), which makes it easier to say that Kaminey would be amongst the movies of the year along with Luck by Chance.
I will not reveal the story, unravel it yourself and remember, ‘yeh duniya badi kutti cheez hai’…. it will make you wait till you get another movie as good.

3 thoughts on “This “Kaminey” was better than most I meet…”