Reflecting the glaring positives which came out of India’s successful defence of the Nehru cup 2009 and lists ten reasons to being hopeful about the national team.
10. The Authorities (AIFF): We love throwing rotten tomatoes at them (not without reason), but let’s step back and appreciate them for a few steps taken. Channeling funds towards arranging trips to Dubai and Nou Camp, even in economic downturn scenario, was a bold step. This ensured the national team got to play together, finally, as a unit. They got exposure and training in world class facilities, in different weather zones, different grounds and versus unknown opposition of some quality. In 2007, it was a similar trip to Portugal which did the trick then. Not to forget the East Bengal coach, Subhash Bhowmick, who opened our myopic eyes and took his team for a month to five star facilities – swimming pool, gymnasium – enroute to their winning the ASEAN Cup in 2002.
9. The Authorities Again (AIFF): For the continuity in team selection as well as venue selection. The core members of the 2007 and 2009 teams remain the same and bode well for another two years at least. Ambedkar stadium indeed is now indeed India’s footballing fort. It was so easy for the authorities to chop and change players or rotate the venues in a bid to keep state bodies happy, but they didn’t.
8. Singhs are Kings in defence: At 26 and 24 years respectively, Surkurmar and Gouramangi Singh are kings in our defense. They were a mixed bag at the Nehru cup 2009 – with solid performances, some solid forays (particularly by Surkumar) and coupled with few mistakes on other days. However age is on their side and assuming that a footballer reaches his peak around age 27-28 years, both should hold forte for a good few years. 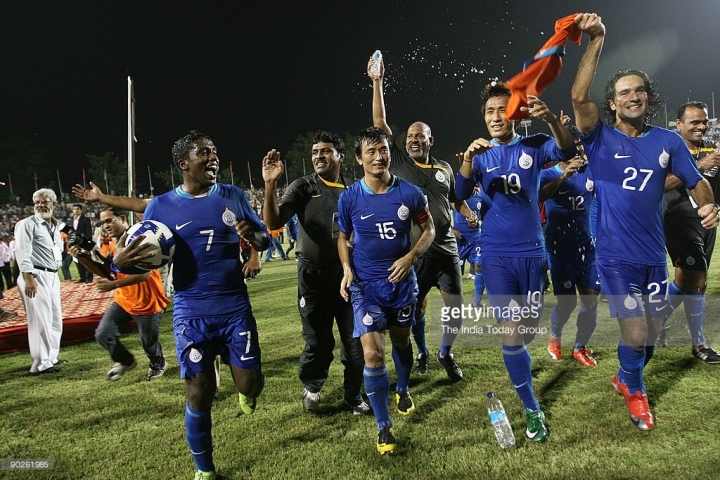 7. Trio in need, are good indeed: Climax Lawrence, N.P. Pradeep and Sushil Kumar Singh – all of them were good throughout the tournament as well as the buildup games in Barcelona. Climax, at 30 years is still far from the climax stage of his footballing career (!) and in rookie Sushil Kumar Singh and the established N.P. Pradeep, we are looking at three players from whom we expect supreme performances in the 2011 Asia Cup. Pradeep had scored the winner in Nehru cup 2007 final too.

6. David Renedy Beckham Singh: Renedy has entered his name in India’s footballing folklore with a swirling free kick which would have made everyone proud – from David Beckham to I M Vijayan! He was good throughout the tournament but that one kick will have long term impacts. Typically, when a final is played into extra time, the probabilities of the underdog team creating an upset win increases.
However, in this case, as the clock ticked, the most ardent supporters (including yours truly) had doubts in their mind whether India were cracking versus a fitter, more formidable unit. The national team had zero experience of playing extra time in a final, and slowly it seemed, it was becoming a matter of when India’s tiring legs would lose the battle, rather than if. At that juncture, Renedy scored and gave India the initiative after 113 tense minutes of stalemate. From that point, Syria were always chasing the match and that was heartwarming, to say the least. It gave renewed hope, joy that this team won’t crack under pressure.
Published: http://www.goal.com/en-india/news/2292/editorials/2009/09/11/1493837/comment-ten-reasons-to-be-positive-about-indian-football
Can you guess what would be the Top 5 reasons to be positive about Indian football? (to be concluded)