Capello has problems aplenty – least of all, squad selection; and most of all, managing expectations. Akin to India in cricket, any dance in the world cup without making a stage appearance on the final day, will be deemed, failure. A semi-final appearance will be praised if and only if the team lose out to bad luck, wonder goals, cheating from opposition or rank stupidity from own players.
Can he end 44 year drought?

Hey, I just listed four reasons which have featured in all of England’s World cup exits the past 25 yrs! In Mexico ‘86 it was a blend of cheating and wonder goal; in Italia ‘90 it was bad luck on penalties; in France ’98 it was ‘Stupid Beckham’; in Japan-Korea ’02 it was again a combination of bad luck and wonder goal and finally in Germany ’06 it was ‘Bane Rooney’! If I missed out any event, it would be due to the worst of all possible reasons – couldn’t qualify for USA ’94!!

Somehow the Queen’s media always manage to get a reason for an exit. It seems everything and everyone conspire to kick them out of a world cup – and in Diego Maradona, Diego Simeone, Ronaldinho and Cristiano Ronaldo – you are almost lining up the best XI of the past 25 yrs!

World Cup football almost comes as a soap opera to the English, they see and they seethe; and then they get back to waiting for the grand autumn of August (you know for what!). They will go over-the-top either ways, and again, the similarity with India in cricket comes to mind!

England played one semifinal the past 25 yrs – during the aforementioned period, Spain didn’t feature in any and the Dutch played only one in 1998 – that makes three of the potential eight quarterfinalists. The balance five have won a world cup each during this phase – Italy, Brazil, France, Germany and Argentina.

The experts make us believe that England carry a world cup jinx (actually they put every reason but that England never have been good enough). However the European Nations Championships statistic – with just one semifinal appearance in 1996 – convinces that England are, to put it mildly, consistent! So too is Don Capello, but on other end of the rope! 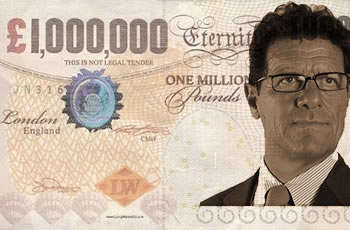 Is He The Answer To England’s Million Dollar Question?

It’s the marriage with Fabio and weakening of other teams across the world (barring Spain) that gives more hope; and may not be too misplaced. Capello has won domestic league trophies with AC Milan, Juventus, Roma and Real Madrid. In his 16 coaching years, he has astounding seven domestic league titles.

What goes unnoticed is that under him the Real Madrid of 2006 was far weaker than the Galacticos of 2003 or that of 2009! His AC Milan team (1991-1994) was weaker than the preceding team which won back to back European championships in 1989 and 1990. His win with Roma was the only league title for Romans in past 25 yrs. Undoubtedly, Fabio does special things.

But he has several conundrums to solve. England’s win ratio is drastically superior when Heskey starts; but Bent and Defoe have scored a lot in 2009 (only to fade away, comparatively, in later part of the season). Gerrard has been ordinary by his grand standards; Terry has broken Bridges (pun intended) in defence; Lampard and Gerrard seldom play well together; none of the first choice goalies are world class and finally, do they have it in their legs? Perhaps the last question is most pertinent and a reflection that players playing day in and out in great leagues seldom win World Cups. It took scandal “Calciopoli 2006” to spur Italy to being current defending champions. Spain’s possibly, all time best team, have to show it in a world cup (and they have a growing injury list to contend with – Torres, Xavi, Iniesta, Villa….)

Harry Redknapp recently thumped that Spurs players can bring home the World Cup. He started with six domestic players in the match at Eastlands which clinched them fourth spot. Capello’s 30 man squad has six Tottenham players, the most supplied by any club – so, thank you Harry, for that. But for an English fan, don’t think this draws enough inspiration when told that Totts players will get home the world cup!

Capello’s previous triumphs have been based on superior fitness regime, but how much of that can be applied to an England XI, who were giving every inch of their body well into the month of May, is anybody’s guess. The pundit thinks an easy group topping is on the cards, after that a potential matchup vs Australia, followed by quarter final vs Mexico or Nigeria (Not banking on France to top the group of death). This could be followed by England’s first major test – semifinals vs Brazil – the English will treat this event in itself as their gift to football; for whatever happens after that, you may need to go back to the first paragraph and read on.