England’s honeymoon domination over India lasted all of two hours in Indian soil. At Hyderabad, once Patel and Pietersen combined together to dismiss Virat Kohli, reducing India to 123/4 at 28.5 overs, my social media pages started getting swamped with messages like “Are we still playing at England?”.

Since then, ie within a week, of the first ODI, Jadeja, Vinay Kumar and Rahane, gave match winning performances; Umesh Yadav gave hope and R. Ashwin gave no chance to the selectors to look at other spinners. None of these players took the field on THAT night at Mumbai. Neither did Parthiv Patel. Even then, England are struggling to compete with an India XI which has just four players from the World Cup winning XI.

I guess, Welcome to India!

No rains to the rescue, no DuckWorthless-Lewis issues, no Hot Spot putting India into cold spots – just clean ruthless thrashing of a team, who had just started basking in the glory of a World No. 1 ranking in Tests. Prior to this series, England had a 11-1 ODI record vs India at India. You would think, the world No. 1 Test team, just fresh from a 4-0 1-0 3-0 whitewash would like to continue their domination.

Not England; They rested their strike bowler, despite injuries to their star of the season, Stuart Broad, and promising youngster Eoin Morgan. Rested for a series vs the world champions? Seriously? Is this a sign that either England are arrogant or are they not too interested in the shorter version of the game?

Compare this with how India reacted on English soil! Once they were down for the count, the selectors turned every stone to ensure our best players could be pushed to compete. Sehwag was rushed in, Bhajji stretched himself, while Sachin and Gambhir were repeatedly thrown into the mix despite not being fully fit. We won’t go into the medical clearance process of NCA or of the team management decisions, as of today, but there is no denying, we stretched our best players in an attempt to regain back our pride.

No wonder this English team had a forlorn, lost look, from the moment they landed. Like gracious hosts, BCCI gave them two practice games in the same stadium where the first ODI was to be played. Seriously. Can you ever imagine India getting two games at Melbourne, Johannesburg or at Lords, before the first game of a series?

But we do it; because we are nice. When we were getting thrashed, feeling brunt of bad decisions, running out of luck – we didn’t whine, complain or throw tantrums. Compare that to the English pace bowlers who repeatedly sorted to sledging, gamesmanship, frustration and abuses whenever they got hit for a couple of fours, or a batsman backed out due to sightscreen issues or when Praveen ran an extra single when a throw directed at the stumps hit him and got deflected! 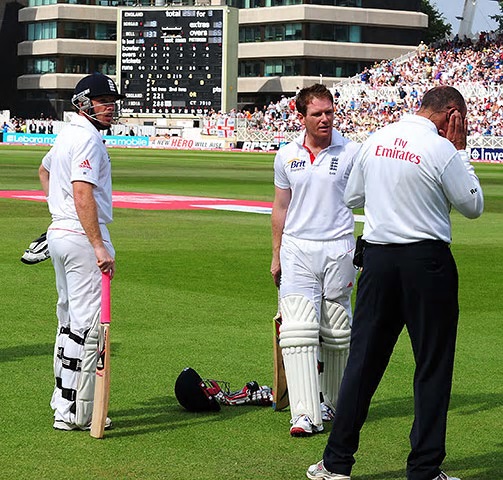 The height of bullying occurred when the burly six feet plus pacers – Broad, Anderson and Bresnan – would walk up and sledge to pint sized Parthiv and Rahane at England, despite leading the ODI series at that point! This was a far cry from the last Sunday of July, when captain MS Dhoni recalled an irresponsible Ian Bell after the latter had been legally run out. Even Bell, took a good 79 days to realize the sporting value of the act and publicly thanked India, only prior to the Mohali game.

Mohali’s thrilling encounter just about overshadowed the comical Craig Kieswetter show. Unsportsmanlike to the hilt, the English wicketkeeper made vociferous appeals even when no edges existed. All those appeals intended to pressurize the local umpire and divert attention from wides. It all backfired, when all those efforts diverted his own attention, as he missed two key ‘catchable’ catches and a lollypop run out attempt, when his feet knocked the stumps. In between, in a sign of disgust he had a swipe at the stumps, when one of them could have hit the diving Parthiv Patel on the face!

Public emotion would be to push India to go for a merciless 5-0 series victory. That will give comfort to many – the same people who are relishing the 123 runs, 8 wickets and 5 wickets victory margins. However there is no point living in illusion. No point getting sold to the cheap war cries ranted by television news channels, when a 5-0 ODI victory can never even qualify to be half a revenge story for a 4-0 1-0 3-0 horror show.

Hence, common sense suggests that MS Dhoni needs to be given a fortnight long rest in his hometown; Gambhir needs to check if he has a strategy to be at peak fitness for the Australian tour; ditto for Praveen; Yadav, Vinay, RP Singh and Aaron need to be given the new ball and the responsibility to lead the country’s attack; and the likes of Tiwary, Mukund, Rahane and Dinesh Karthik/Wridhiman Saha, an uninterrupted extended run. Never mind if in that bargain we lose an odd game to England or West Indies.