On eve of 14th Feb I spent some time with my Valentine (wifey) discussing outstanding love stories that have been portrayed in movies – away from the world of European locales, designer clothes, wedding songs, teddy bears and terminal illness. I concluded on a top three list and while I don’t expect anyone to agree with the listing, nevertheless all the mentioned movies are highly rated movies and worth a view. So, here’s my three best love stories ever… 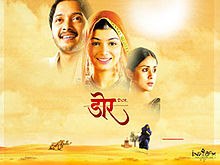 The film’s ‘power of love’ driven character is played by Zeenat (Gul Panag), who faces the daunting task of saving the life of her husband, who is on trial for murder. Zeenat is an independent Muslim woman who comes to know of  her husband arrested for murdering his roommate, Shankar, in far flung Saudi Arabia. She is convinced that it must have been an accident, but Saudi law is unforgiving and for a petty labour class immigrant, there is nothing but execution in store. An Indian officer explains to Zeenat that Saudi law permits release of a criminal if the wife of the deceased forgives the guilt.

Armed only with a photograph of Shankar and Amir, Zeenat sets out to find Shankar’s wife, Meera. This looks like an absolute hopeless attempt upfront. After enduring hardships and making educated guesses (with help of a con-man) she reaches Meera’s house only to be greeted with curse, venom and spit. She doesn’t lose hope and feels maybe befriending Meera might help her cause, without revealing her intent upfront. Over next few weeks, Zeenat refuses to lose hope and works on their friendship, bringing out the missing part in each other’s personalities. In the process, Zeenat realizes Meera’s helplessness … totally new to her forthright way of thinking. Meera, on the other hand, gets a glimpse of freedom from the life of a widower trapped in a haveli. This brings her out of the shell of traditions and gives her a fresh perspective on her own life.

When the news of the imminent death sentence arrives, Zeenat is compelled to tell the truth to Meera. Meera is shocked beyond belief to hear Zeenat’s words and the fact that her friendship was based on false pretenses is what hurts her more. She refuses to sign the maafinama (translation: statement of forgiveness) and Zeenat eventually accepts it as fate and decides to leave for her hometown. Meera later has a change of heart,  and encouraged by her paternal grandmother, she hurries towards the railway station, where she meets Zeenat and gives her the signed statement of forgiveness. At the last second, Zeenat extends her hand from the train and Meera grabs it and climbs aboard, presumably running away from the only life she has ever known, as the train speeds up into the distance. 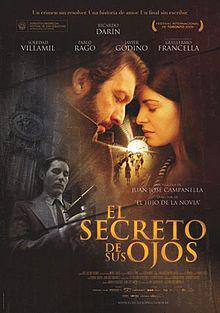 and Soledad Villamil. In 2009, it won the Oscar for Best Foreign Language Film at the 82nd Academy Awards apart from receiving the Spanish equivalent Goya Award.

The film has two parallel  love stories. The lead pair (photographed in the poster) are lawyers who just aren’t able to express their emotions during their moments of working together as boss-subordinate. A rape and murder case investigation gets them closer but then life threatening circumstances force them to separate. 25 years later they meet to discuss the same case, solve the missing parts and then decide to spend their last years with each other.

However, for me the film’s ‘power of love’ driven character is played by Ricardo Morales – the person  who has just got news of the love of his life and drop dead gorgeous wife, Liliana Coloto, being brutually  raped and murdered. This takes place before Argentina’s Dirty War (1976–1983), during which criminality and violence were rampant and often went unpunished.

So you have all the possible corrupt methods happening where the government  is desperate to protect the rapist as he is their own spy. Innocent immigrants are framed, investigating lawyers (lead pair) are discouraged repeatedly and finally the process is rudely interrupted when unknown elements make a sincere attempt to kill one of them. All this while, for over a year, Morales maintains daily surveillance at Buenos Aires train stations to catch the killer. He says he has nothing left in life to do so after work (at a bank) and so he sits in train stations and watches the sea of commuters in the hope of catching the culprit.

25 years later when the lawyers meet to discuss the case (in form of writing a novel) they agree the story lacks the right ending. They are looking for the answer to a question: “How does one live a life full of nothing?”

The male lawyer convinced that Ricardo Morales’ eyes spoke more than what it seems, locates him leading a quiet life in a rural area of Buenos Aires Province. Although the widower apparently has relinquished his obsession with the murder case, he is asked as to how he has lived without the love of his life for 25 years.  Only to find out that Ricardo has caught the murderer and imprisoned him in a makeshift cell, undetectable from the outside. And for 25 years, although he fed food to the prisoner, never spoke a single word, giving him also to lead a life “full of nothing”.

It is one of the two movies nominated by Tamil Cinema as India’s Oscar entry for Best Foreign Language film.

Shot in hyperlink format, the story is narrated through flashbacks. The film’s ‘power of love’ driven character is played by Velu, a teenager with troubled childhood, who works in a roadside idli shop. He is attracted to Jyothi, who is a maidservant at a nearby apartment. Velu falls in one sided love despite all his advances being disliked and he is seen as nothing more than a vanilla roadside romeo. In one of the houses where Jyothi works, lives Aarthy who falls in love with a impressive boy with unimpressive intentions. On finding herself a victim of an MMS circulation, Aarthy feels aghast. When she threatens to approach the police, her lover boy attempts to murder her by throwing acid on her face. But as luck would have it, the maid servant Jyothi, opening the door to ring of a bell, finds acid on her face and sustains serious injuries in the process. The corrupt police and the lover boy’s influential mother cover the case and find a scapegoat in Velu who willingly agrees to be the guilty party who threw acid on Jyothi.

Despite never getting the chance to even talk to Jyothi, Velu’s love for her, makes him take this burden as he is promised by the police that money obtained from the influential family will go in reconstructing Jyothi’s face. Velu is sentenced for several years in prison. Later it is informed to Jyothi that Velu did not commit the crime and is falsely accused in order that she must be cured. She realizes that police have cheated her and Velu, and goes to the court and throws acid on the inspector’s face. Jyothi is arrested and as enquiries run course the judiciary finds Velu as innocent and releases him. The original original acid thrower is arrested and Jyothi is also sentenced for years in prison. In the final scene, Velu meets Jyothi in prison and proposes his love and tells he will be waiting for her, to marry her, and leaves the cell as the door closes with the chilling disfigured face of Jyothi shown on screen.

(Credits: Wikipedia for portions of the plot of the movies)

One thought on “V-Day Special : My Top Three Love Stories in Movies”