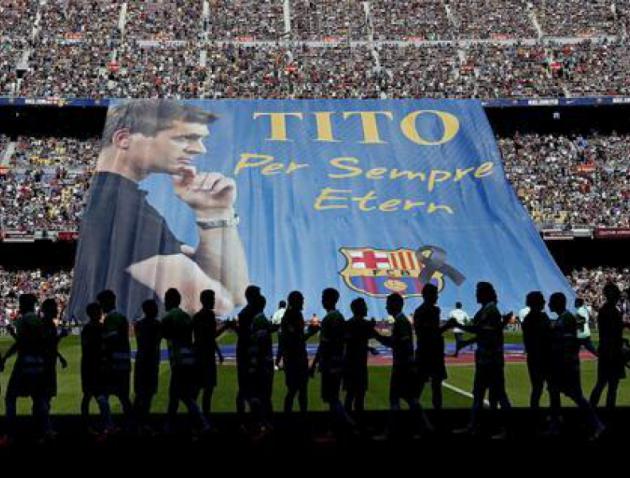 Former FC Barcelona Manager, Tito Vilanova’s untimely demise on 25 April 2014, at age 45, had since left me shattered, introspective and judgemental of God’s fairness parameters. This write up was due.

Even in this rapid internet age, the first time world came to know about Tito Vilanova was in Aug 2011 – when an unprovoked Jose Mourinho, poked the Barcelona assistant manager in the eye. By this time he had spent three fruitful years, helping the Catalan club redefine football and on way to becoming one of the best football teams ever.

Humility perhaps is ingrained in FCB so deep that each of their home grown stars make little to no headlines outside the arena – Iniesta to Messi to Xavi to Guardiola to Puyol to Valdes. In the book ‘I am Zlatan’, Ibrahamovic had mentioned how the Spanish club environment reflected to that of a kid’s school. It was a sarcastic and an unfair comment, but not a single soul associated with Nou Camp reacted to it – the class, the grace has always been left intact, the results too.

Pep Guardiola couldn’t take it beyond a point – the unfairness of it all. The accusations of favouritism, the pressure to win every game by big margins and the constant challenges God was throwing at him.

In March 2011, he carried burden to disclose to the squad that one of their most loved and dependable player, Eric Abidal, was diagnosed for a life threatening disease. Eight months later, he had to break news that Tito was diagnosed for throat cancer. Digesting tragic news is tough enough, sharing it with fellow mates even more draining and it gets killing when day in, day out you see your near ones suffering around you, while the world cared little, aside massive onfield displays.

Often Pep wondered at its need. All the stress, tension, sweaty sessions, hard on knuckles preparations, the wins, the trophies, the challenge of being best ever …was it all worth it…particularly when you had two people in your squad fighting for their lives at such young age?

The club left no stone unturned in ensuring the best medical treatment and facilities. Abidal survived to lift a Champions League trophy (another wonder gesture from the team) and revive his football career with some of the best clubs in France and Greece.

God wasn’t kind to Tito though. Twice he went through surgical table and got tumours removed. Often he felt he was winning his match. But it kept relapsing, again and again. In his final speech before resigning from the managerial position he mentioned about his treatment “…I know that I am not playing this match alone, but I form part of a Club that will help me get through this long process, as it has done until now…”.

At kick-off of what seemed a blossoming managerial career, at supreme fitness levels, at peace watching his kids grow, his life fell apart, completely. One wonders at the unfairness of it all – if any age, any rigorous health regime, any amount of peace of mind is still not going to be enough to help us foresee the near future, then what can?

Four months before he breathed his last, Tito was spotted amidst the stands in a game vs Getafe. Only one far range snap made it to the internet. He seemed sick, face disfigured and days counting – a sight which would have got tears in all eyes.

Tito finally left for heavenly abode on 25 April 2014. A day later, a shaken Barcelona team took on the pitch and came from 0-2 down to beat Villarreal in an unconvincing performance.

Tito must have smiled from heaven. And still doing as he watches his son Adrian learning all about art, humility and dedication at La Masia.

At the funeral, Tito’s teen daughter, Carlota, read out a speech which brought many Barcelona players, officials and faithful to tears.

“Our father was our hero. Our model to follow. Love, my first love. Love that I felt even thought I didn’t even know what it signified. Love that I looked for in my cradle and still look for, hoping it will return home to us. The greatest and most unconditional love one can feel is that of a father in love with his children. Of all the things my father has taught me in these fantastic 19 years, he forgot to teach me what it would be to live without him. I guess that neither he nor anyone else will ever be able to teach me that, but if I had to choose the best way to learn it would without a doubt by his example, that life is too short to spend time on things that do not make you happy. He always told me to fight for my dreams and that my passion would become what I devoted myself to. For my father nothing fell out of the sky. His passion for football, work and dedication led him to achieve his dream: sit on the sidelines of the first team, a team that has always been in his heart. Yesterday, when they brought the ashes home, at first I could not understand how someone so great could lie in there. But the truth is that my father is not there. My father is alive within me and [within] all those who loved him. And that is where he will live forever.”

Tito must have smiled again.