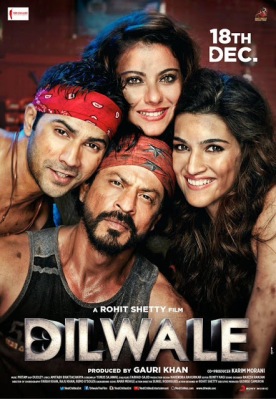 King Khan returns with Kajol (am I sounding K…K…K already?) to give a Rohit Shetty blockbuster filled with action, car chases, Bulgarian landscape, ever improving Varun Dhawan and (my bet for the next big female superstar) Kriti Sanon.

I watched an early evening weekday show at one of the many theatres (it’s running) in Singapore, and it was a full house with at least five different nationalities on view – Indians, Malays, Chinese, Singaporeans, Bangladeshis (and likely Pakistanis too).

The hall roared during most parts of the film, including my kids. It was funny, silly and full on masala, a typical Rohit Shetty fare to crown the holiday season.

Khan and Shetty mitigated all risks with endless marketing tie ups – from Chota Bheem, Oggy and the Cockroaches and Kris amongst cartoon programs to a host of products and TV shows – the dreary patch-up #BhaiBhai selfie at Bigg Boss 9 being one of the latest stunts.

The above was a smooth indicator that as a product Dilwale wasn’t ‘SRK worship’ or ‘holiday season’ proof. Also, the excess promotions were SRK’s touchback with public after some voices – sprouting out of his ‘intolerance’ controversy – started taking shape of protests.

Dilwale is a tolerable fare without much repeat viewing value. The first half reminded me of Bachchan’s epic Hum and that soured the experience for the movie maniac in me. Shah Rukh’s characters (Raj & Kaalia) were no match to Shekhar & Tiger. The visuals of Bachchan lowering his spectacles, throwing back his head and swinging hair, kept coming.

The SRK-Kajol pairing (coming together after five long years), kept reminding me of the now forgotten Kimi Katkar and her Jummalina’s love for Tiger. Needless to say Jumma Chumma, which hit national anthem proportions popularity in 1991, cannot be equated with Gerua (Bore-hua, rather).

SRKs movies (and most big banner glossy chick flicks) have this irritating knack of playing songs all over television channels pre-release, getting colleagues in the film industry to eulogize them, and force aam junta to start humming. Chammak Challo was a pioneer in this – the trashy song was played in every disc, every marriage, every party that year with no repeat value few years down the line.

The songs of Dilwale are average, storyline too predictable. It’s just the comic timings and the dialogue that keep the audience glued, apart from the obvious visual delights – scenic locations, designer clothes, all four leads chiselled up, Kriti’s lovely smile in red dresses and Varun’s energy.

The jokes in the second half remind you of Govinda-David Dhawan comedy and that lifts the movie. It’s surely not as bad a movie as people are making it out to be (another herd mentality) and has its moments. Though making mockery of renowned actors – Boman Irani, Mukesh Tiwari, Johnny Lever, Sanjay Mishra, Pankaj Tripathi – and wasting so much talent was not done!

Besides the gamut of marketing and promotional tie-ups, Khan and Shetty also got their timings right. The next big release (still weeks away) is Wazir. (From the looks, a meaningful movie, which obviously means mass Indians and most multiplex audiences will stay away from).

Historical drama/biography Bajirao Mastani, which released alongside Dilwale, is potentially another meaningful film. Indians have hardly appreciated historical films or biographies made by their own film industry. They only lap up ones from Hollywood, laced with Oscars. To add to that, director Sanjay Leela Bhansali has developed a reputation of long, slow paced films with focus on detailing and aesthetics. Current stressed generation fed on fast food and WhatsApp jokes aren’t likely to appreciate works of art as much as they would be willing to splash money on silly, mindless laughter.

In a way, India deserves a Dilwale, even though it reduces the legendary status of Shah Rukh-Kajol and Dilwale Dulhania Le Jayenge. Dilwale will pull the crowds and ultimately Shah Rukh and Shetty will Le Jayenge real Dulhania – laugh all the way to the bank!

The overseas crowds had their share of laughter and clapped at the end credits. NRI audiences and average common man always seek entertainment, but if Shah Rukh has to be respected longer, he needs to add to his Chak De, Swades shelf of movies.

Box Office Prediction: Around 250 crores likely, with significant contribution from overseas. India maybe affected with protests, boycott and people ranting. But I’d say don’t get swayed, it’s fashionable to abuse SRK. Same people maybe queuing up for tickets due to peer pressure, for not missing out on SRK.