The meaningless ‘chul’ song irritated so much that I wasn’t keen to see the body (movie). Dharma Productions latest flick, Kapoor and Sons, from Ek Main aur Ek Tu director, Shakun Batra, seemed like standard template time pass, that Karan Johar used so effectively over decades to tower himself at Bollywood.

Sometime into the movie, I still carried that mental block. Rishi Kapoor for sentimental scenes; bra hanging from ear jokes; young stars with plunging necklines smoking inside a loo, onscreen, to ensure they aren’t sitting idle at home, offscreen; seemed to be the order.

Even Singapore weekend noon show at a suburb hall had barely 60% full – a fair indication that audiences weren’t captivated by trailers nor did they get attracted to Alia and Siddharth as much as they get to their, ‘Student of the Year’ co-star, Varun Dhawan.

But deep into the movie, the performances grip the audience. There is a family fight scene around a plumber, and it gets you giggling and feeling sad in equal measure. Few scenes later, Alia & Fawad start naming dance moves – electrocution, shampoo ad, ironing and chakki peesing! By this time you are in love with the movie going through the elevated roads of green Conoor.

Kapoor and Sons is about two brothers who don’t feel equally loved. Early into the movie they don’t sit together in the car back seat either. Their connect to the family elders (a brilliant Ratna Pathak & Rajat Kapoor) is thanks to ailing but mischievous grandfather (Rishi Kapoor’s well written character) who has one simple wish – to have a family photograph with everyone smiling together.

The Boris Becker poster aside, many things about the movie is relatable to life (including my life). Unequal love given to siblings, extramarital flings, my late grandfather birthday surprise which was organised (without my knowledge) to hijack my marriage reception, struggling to get family laugh aloud together, son urging parents to love and respect him and overall inability to trust any family member. Kapoor and sons has subplots (a bit too convoluted at the end – one sexuality angle could been avoided) and unattached strings worth keeping you relating to your family.

The emotions aside, the performances are top draw. Starting with the photographer character ‘Wasim’ and his gesture when meeting Siddharth after long time. The Malhotra hunk is decent (and obviously charming) but surrounded by top draw actors, does get caught out at times. 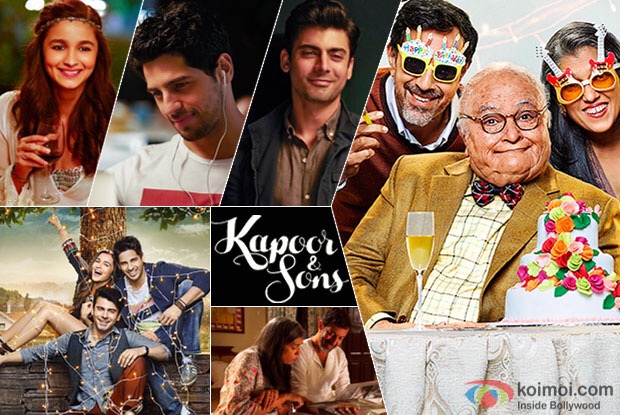 Fawad Khan looks very different in this movie, and at times has the Nawazuddin Siddique angles in his acting skills; possibly inspired.

But knockout punch of the movie comes from one Alia Bhatt scene. Talented to the core, just a couple of expressions will get the tear rolling from your eyes. And the life lesson – talk nicely with anyone, anytime as you are never sure to meet the person again in life or not.
Rating : 4/5 Must watch.

Box Office: I doubt the 40 crore budget said for this movie with majority of the shots within two houses. This is good cinema and deserves positive word of mouth, good business. It may struggle to reach 50 crore mark but deserves none the less. If it flops, the makers will attribute it to the ‘absence of nonsense’ and may go back to their movie hits template, and that would be a shame. Go watch it. There’s a tribute to Ram Teri Ganga Maili too!