After a disappointing El Clasico loss, I completed Part Deux of my Football Pilgrimage with Barcelona featuring in an edge of the seat come from behind win vs Atletico Madrid. Here’s my fortress Nou Camp experience amongst the vociferous crowds. 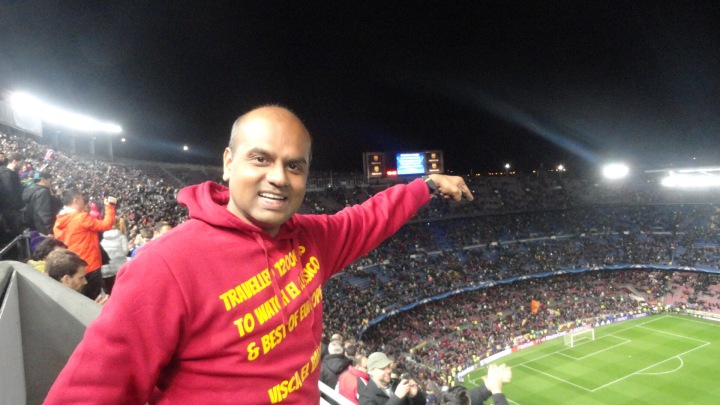 For a start I need to thank the almighty for stopping the drizzle just before the game. Else in that 10 degree chill, even my disposable rainwear would have only given limited relief.

150 minutes into my Football Pilgrimage, I was wondering if my trip was jinxed. Loss to Real Madrid and trailing to an utterly hard on knuckles Madrid team 0-1. Three days and the season seemed to be cutting short, I called upon the almighty.

The almighty and team Barcelona aside, the Nou Camp had a big role to play over the win. Nou camp was electrifying, crowd was the 12th player and it was first hand see all of what home game means to a club encounter. Here’s six crowd behaviour points that was buzzing around the stadium and intimidating onfield personnels in some cases. 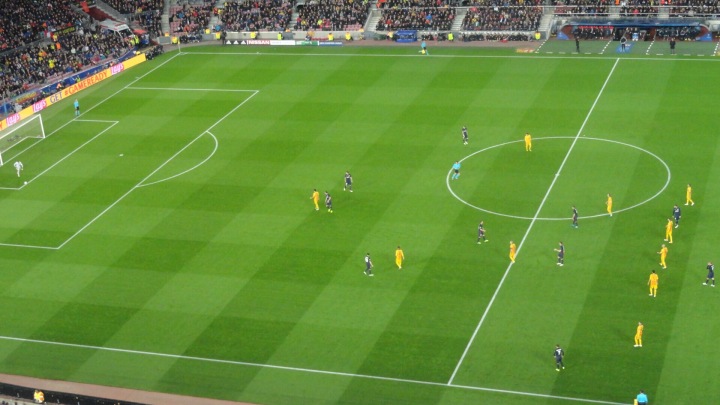 From the opening minutes onwards Atletico goalie Jan Oblak was playing with fire. Each of his goal kicks would come well after his own defenders walked beyond half way mark towards half line. This is same tactic Mourinho’s teams and Chelsea in 2012 played at Nou Camp. The crowd knew that. from opening minutes onwards, they whistled, jeered and booed loudly everytime he delayed. It was a matter of time before he got carded. Once that happened, the goal kicks started flying in faster! 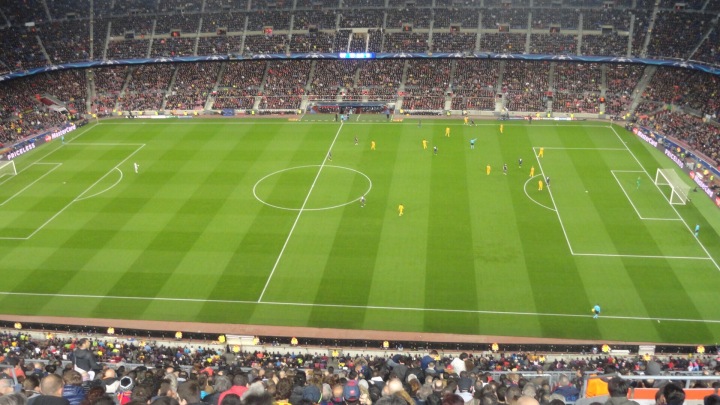 Against popular belief, Cholo Simeone came up with two plans for this game. Initially he setup a 4-3-3 (and not his traditional 4-5-1 or 4-4-2) and believed Atletico could get the lead. He was right. This pic is of 6th min and very unlike of this team, almost all Atletico players are in Barca half. I wish he continued that tactic well after the lead than get his players to hack around. When you play negative football, you get only cards, reciprocation, controversies and ugliness. This game, amongst top two sides in Spain currently, deserved better than 10 yellow cards, one red card and 2+5 minutes of injury time. Simeone’s Argentina of 1990 World Cup was roundly booed across the world as playing only negative Football. But coaches like Jose Mourinho, aided by powerful London media, have made this brand of football now be called tactical and strategic. The basic intent of football, when you give a ball to a child, is to kick the ball and score a goal. You never tell him to kick other’s foot! When Simone’s team was attacking, crowds were hush even early into the game. Once the hacking started they knew it was time for them to make meal of every tackle and pressurise the referee. 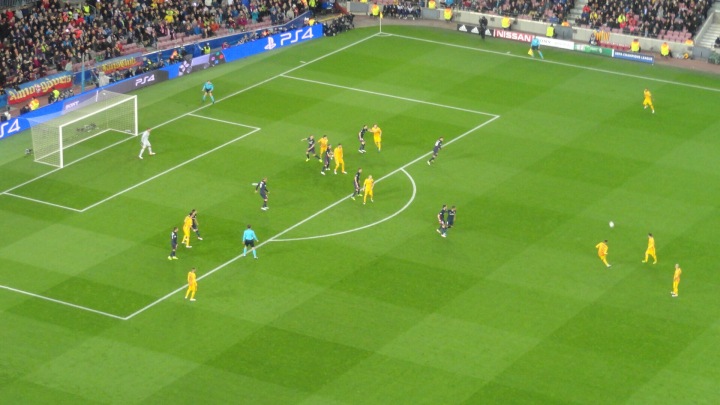 Pep Guardiola’s Barcelona would struggle with passes and openings after being 0-1 down. It would psyche them out in big matches everytime they fell behind. Luis Enrique’s Barcelona are different, more direct and incisive. Even when 0-1 down, and the fear that it could be 0-2 anytime, they literally had ten people on last third of the pitch. This pic clicked at 40 min. Yes, last third of pitch! Once the attack would complete, most of the times, the Catalans would stay in Atletico half and snatch back the ball. The crowd would at this time go ‘Barcaaa Barcaaa’ (clap, clap, clap), Barcaaa Barcaaa’ (clap, clap, clap)! In the second half this was happening almost every third minute! 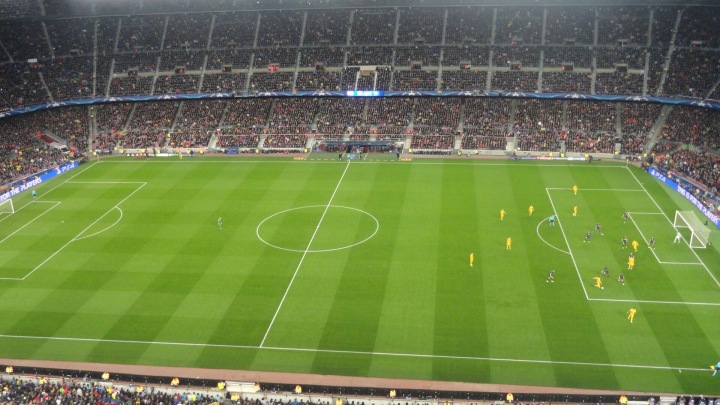 Despite Barcelona pressing higher and higher (this pic at 1-1 scoreline where Pique is almost in last quarter of pitch), Atletico never lost shape. 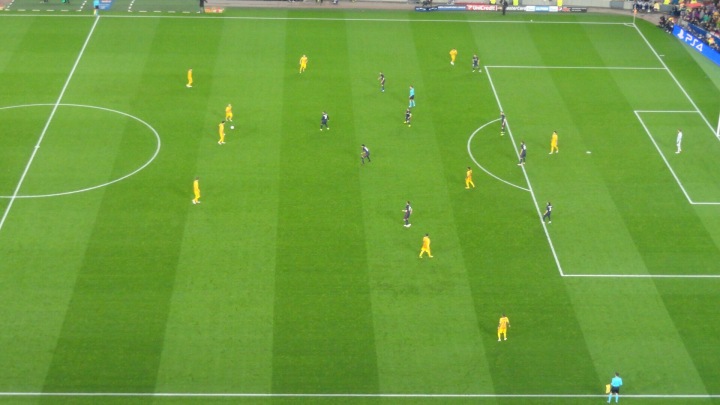 At any point you could draw three straight lines showing 1-4-4 or two straight parallel lines with 5-4, a wall of five midfielders and behind them another wall of four defenders. Despite the loss, Atletico’s defence gets 10/10 marks. Any other team may have lost by 5-6 goal margin as more than ten clear cut goal scoring chances were created by the Blaugrana. The crowds appreciated this defending and at times clapped too. However when it turned ugly, ie any Barca player would be fouled, or atleast it seemed from that distance, the crowd would go wild urging the officials to act.

This panoramic shot i took immediately after final whistle, going up the stands and loved it totally. It showcases the cauldron atmosphere of the Nou Camp, almost a boiling pot, for opposition teams. 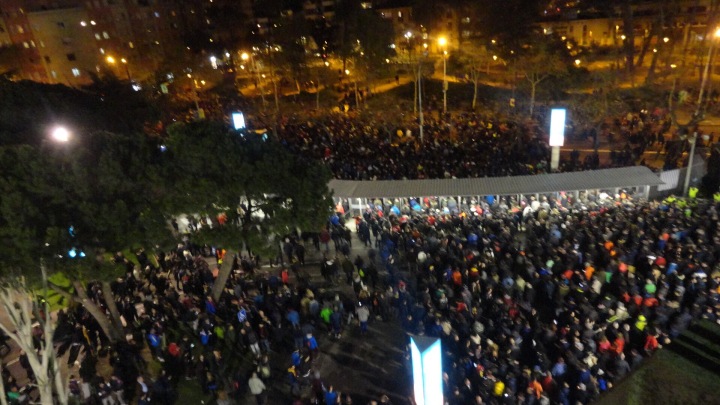 The pic above is of crowds returning home with spring on their step. After the Clasico, the crowds returning were more ease, disjointed and not much emotion. Here everyone was moving faster, pushing each other, urging each other, there was talk about slender win, about the away goal and come from behind spirit of Barca. When a sporting team wins it impacts life of a huge population for some days. That was evident here.

It was fabulous, mesmerising (despite Messi not scoring!) and exhilarating experience. But I stop my blog now as need to rush France for Paris leg of my Pilgrimage. Do watch out!

(This article was first published on Sportskeeda then reproduced here)