After two nail biting experiences at Camp Nou, El Clasico and the Champions League Leg one game vs Atletico Madrid, I woke early morning Wednesday and flew down Paris for concluding part of my dream Football pilgrimage.

Paris greeted us with chill and drizzle as we took a taxi to the hotel, which was less than a kilometre away from Eiffel Tower. The hotel upgraded our stay from a single quadruple room to two connecting double rooms. At prime Paris location seeing the kids running around both rooms, lifted my spirits.

We had a relatively inexpensive Chinese lunch nearby and walked on for the customary visit to the Eiffel Tower. After the routine photo taking, I pumped myself up for the evening with a 700 step climb up to level two of that wonder of the world.

I was happy. Paris had welcomed us. Everything was going smooth and all stories of an unsafe city, pickpockets on the loose and rouges all around seemed as far flung as how western media some time ago painted New Delhi, India as the rape capital of the world.

After a quick afternoon nap, I started getting ready with my checklist

– my pilgrimage customised hoodie on

– a disposable raincoat (poncho) in my back pocket

– camera and phone, both with 100% charged batteries.

– keep my smartest and alertness intact.

My selection of hotel had adequate planning on the day the Champions league draw was out and my Football pilgrimage itinerary finalised. The hotel was in between Eiffel and stadium – just three kilometres away from Parc Des Princess. This was to ensure after the game, late at night, I could rush back home amidst the 48000+ sea of fans so that my family don’t worry long.

So I took the train and left for the stadium. That’s when my stomach started getting butterflies as I knew my ticket was amongst the cheapest stands and fans around me wouldn’t be the nicest. I had Visca El Barca written on my shirt and loved both Manchester City and Paris St Germain. All I wanted was a great 3-3 type thriller. But would they understand? Whom should I cheer for? Whom should I boo?

As a principle, I don’t boo any player unless when red carded, time wasting or hacking players around. So I could never bring myself to boo a Ronaldo, Benzema, Bale, Modric, Kroos or a Griezmann, the previous nights. That left with me option of just going with the flow, be with home supporters, be vociferous for the home team and enjoy the evening.

On reaching my stadium gate, the nervousness grew. There were security and police personnel at every nook and corner. Two rounds of checking tickets and one round of body scanning. Most of the security seemed to be roaming around my stands, expectedly.

I took the edge seat of 5th row from the bottom to have a close view of the players. Unlike Nou Camp where one has to sit only on his allocated seat, at Parc des Princess once you reach your allocated stand, the seating is free. Since I reached earlier and there was light drizzle I got a front seat to take, which wasn’t much covered with shade. Google weather had assured me that clear skies were around the corner.

Soon the seats around me got filled, most with dark skin, weird tattooed, funky hairstyle and ripping muscled people. The security was frequently talking to them not to block stairs, to only sit at the allocated seat and not create trouble. There was an altercation early and the burly security chief (seemingly) came in and made it clear to the fans to behave. The security frequently huddled amongst themselves.

But all my fears with intimidating people around me were squashed soon. I made the first move requesting them to click my picture. That gave them chance to read my hoodie message. Some with broken English spoke a few words. 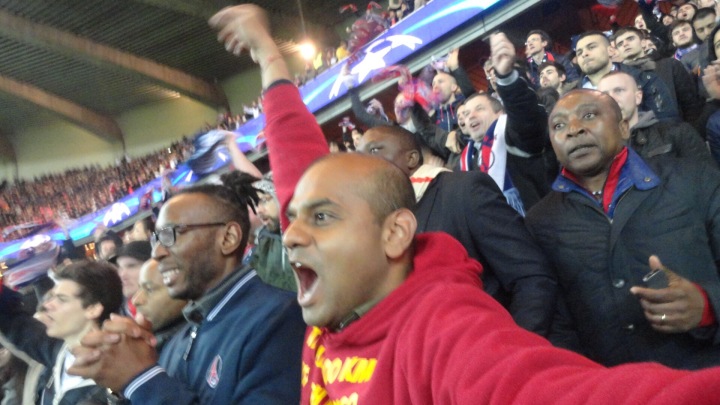 Secondly, I joined them for few of the clapping and PSG anthems they were chanting. Off course I couldn’t shout the French lyrics but my lip synching, clapping and hip movement made up for it.

I kept the same attitude as one of my long time gurujis (!) Shri Shri Sanjay Dutt had said in his movie Jodi no. 1 “Hamare suit tie pe mat jao, yeh coat tie utar gaya na, to hum tumse bhi bade tapori hain”. (translate – Do not go by my attire, am as fun living funky as you)

Sergi Aurier to my rescue

With all the above helping, hell broke loose when Sergi Aurier name was announced in the starting lineup. Aurier was banned by PSG management for indiscipline for few games but it seemed he was most popular name amongst the dark skinned fans. From the time his name was a surprise inclusion, to every time he touched the ball, till when he was substituted, my neighbours went mad. I joined them, every time. 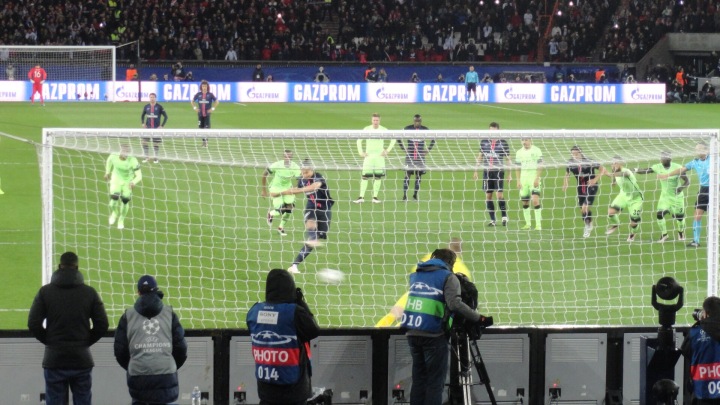 When Ibra missed, surprisingly from the penalty spot, within five seconds the crowd started ‘Eebrahh, Eebrahh, Eebrah’ to back their star man loud and strong. The drums started rolling, the flags were waved high and decibels even higher! 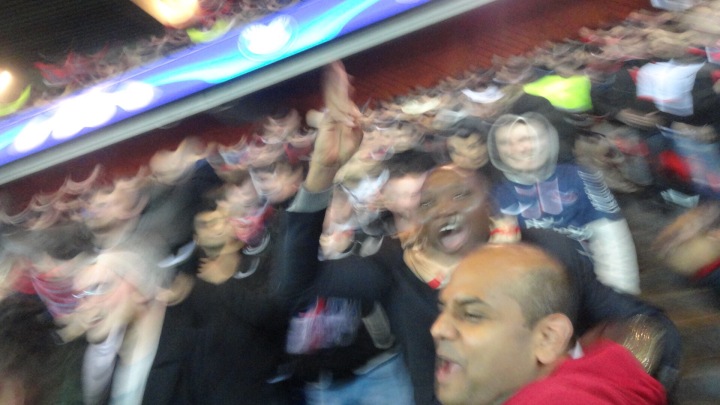 When Ibra scored, surprisingly from a Manchester City howler, the crowd went mad. Almost one and half of them were over me – something which didn’t take place at Nou camp.

The second half was tense but the shouting, chanting, dancing, cheering just never subsided. I could go on and on about that night. The chants still echo in my ears. I enjoyed all of it, soaked it deep in and want to come back there one day. Hell, I want PSG to win Champions league this year for the fans. PSG fans had a giant ‘We Want More’ banner at the start of the game. They are ever improving and deserve ‘more’.

Say no to racism

UEFA have many high profile ads, messages and banners on ‘Say no to racism’. There is no place for racism. I couldn’t find it at the heart of Paris Football stadium. Dark skinned people are nice. I pray that God and the world treats and gives all humans equally.

Thanks for reading my pilgrimage series so far. Soon I will come with my concluding write up on the best pictures, budgeting and sharp tips (my learnings) for any future pilgrimages.

23 thoughts on “FOOTBALL PILGRIMAGE part 9: My best live football experience was with dark skinned people around me”