Couple of days ago, aghast at the, 900+ terror incidents that happened globally in 2016, I wrote a blog on tips to avoid being a terror victim. While the piece was getting published, there were bombs and killings ongoing from Baghdad to Kashmir. Indian intellect media was even defending certain terrorists claiming if you don’t give them jobs, then poverty will drive to pick up a gun. Well! So much so for being intellectual.

Thankfully, hope came via a news near to home, in my resident country – Singapore. Bankrupt in 2014, Mr Lee Koh Wee, took to taxi driving to repay his debts and reset his life. Driving SMRT taxi SHB1881L taxi, the gentleman found $235,500.00 SGD, left by Thai businessman, whom he had just dropped at Marina Bay Sands, Sunday early morning 4:30am.


235,500 SGD = 175K USD = 1 crore + INR = 158K Euros…. In short he had enough easy options to do. But chose to pick the though eat one. Because he believed that his customer, Mr Chukamon Khammat, could go mad losing all his cash. He sacrificed his own future for saving his customer’s future. Hope prevails. Salute, Mr. Lee Koh Wee.

Read what Mr Chukamon Khammat wrote to media which is reproduced below, with every single grateful word that comes from his heart:

“I boarded this SMRT TAXI SHB1881L at clarke quay about 4am after a drinking seesions with some of my business partners and i am kind of drunk at that point of time. And has told the driver to go to Marina Bay Sand Tower 1 where i am staying currently. I safely reached but i forgotten my laptop bag,i immediately turns sober because that bag contains of CASH S$235,500.00 in it.

This money is given to me by investors in singapore for a business plans carried out in thailand. And i suppose to be remitting it today morning. My worries of my consequence of losing this money lead me to a breakdown and i cried in a totally lost manner in my suites.

My wife woke up in a shock as she sees me breakdowns.Upon knowing what happen she says gone…surely we need to bear this sum of money and we are dead because SGD $235k converted to thai baht is 6 million over . i suddenly say i think i go down to the taxi lobby to see if the taxi driver will deliver back the bag of mine..and my wife screamed at me saying “dun waste your time,its $235000 and not $23.50 ,if you are the driver will you return back the bag to the owner?” I kept quiet without a word but duno why my feeling tells me that i must go to the lobby to lookout for the taxi . But the problem i facing is actually i dun even remember the taxi number as i am totally drunk just now.

So my wife seeing the deep shit i have caused she got no choice but to followed me down to the lobby in a mindset that i am obviously wasting my time coming down to the lobby and i should think of alternative ways to raise this sum and we even think of mortgage our house at thailand and even sell off all our assets. But when the lift door open upon reaching lobby i saw a man coming in from the glass door panting and anxious going towards the reception and actually i dun recognise him but i recognise what he is holding onto. Its my laptop bag! 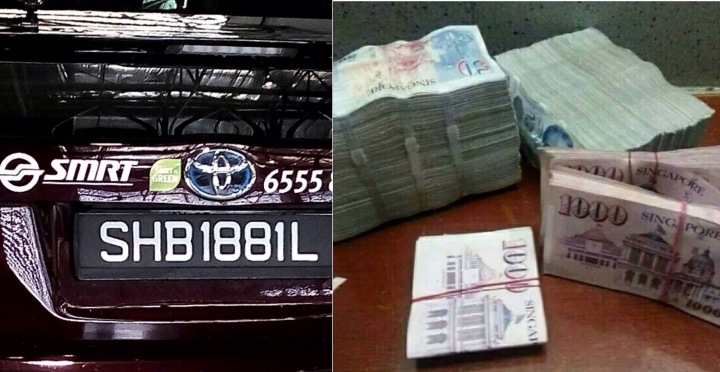 And i and my wife ran towards him and shouting for him and when he saw me he took a deep breath and says thank god…i found you sir…..at that time about nearly 5.00am we are like making a commotion in the lobby. I asked my wife bring up the bag and i urged the exinct kind hearted driver to wait as i need to buy him a drink and offer my appreciation .But we ended up with a short chat in my suites .the driver did not request for any monetary but only asked if i could give him a ice cold mineral water and my wife immediately get it from the hotel bar fridge.and i offered him $1000.00 cash for appreciation of returning this money .because seriously i ask myself if is me i found this money i dun think i will give back too.

And furthermore i get to know from this driver that he just started driving taxi and was a bankrupt in 2014 ,he starts all over from scratch of what he lost and is repaying his debts , this makes me more surprised because if i were him,i found this big sum of money i can start afresh and repay my debts..but the driver replies of why he comes back searching for me is because,he says he intends to go home after dropping me and he has drove off going towards petrol kiosk before going back home but upon reaching he saw a bag at the passenger seat and he said he immediate open the bag hoping to have my particulars so that he can returned to HOTEL to me.but he said he was shocked when he saw the whole bag cash and first thinking is that oh dear this man will surely goes mad if he lose this bag of cash.and even cost life..so he immediately rush to MBS hoping to get the hotel help by asking mbs staff can trace the cctv footage of the guest just now.

I am sincerely grateful and other than being thankful i duno what to say to this kind soul.so i hope i can make everyone knows and can learn from this driver kind deeds. And indeed there is still kind soul in this world.i am sure this driver will surely make a comeback after he earns and repays all his debt. Because his heart is Righteous and his failures previously is also a framed up and trusted too much on business partners.sorry if my english isnt so good you guys may help me rephrased the story.thanks.”

This is also not the first instance nor the largest return amount instance in this lovely republic nation. In November 2012, Comfort taxi driver Mr Sia Ka Tian, had returned 1.1 million Singapore dollars which he found in the vehicle after dropping the couple off at a shopping centre. Later he received an undisclosed cash reward from the grateful couple and his company ComfortDelGro also gave him an award for good service.

We are eternally thankful to such humans in our society who are being inspirational leaders in their own ways.