Behind every successful 104 satellites launch, there are 8 ISRO women standing tall! That seems to be the latest catch phrase in India. However if you Google ‘ISRO women 104 satellites’, you barely get handful of links dedicating solely to the achievements of these women. Surely our media could have done better. Here’s a glimpse of what India’s 21st century women are capable of.

To quote an Indiatimes article “Breaking the stereotypes, India’s self-made women often remind us that any stream of study is not dependent on the gender. ISRO’s achievement of launching 104 satellites in one go has given us a glimpse of the ‘Rocket Women’ of India.. some of them from the famous Mars Orbiter Mission or Mangalyaan project.”

“I have always had a fascination for mysteries of outer space, and knew that’s what I wanted to get into,” she said.

Later, she became the Deputy Operations Director of the Mars Orbiter Mission.

In 2015, and Moumita Dutta became one of the top ISRO scientists, part of a team that worked on India’s acclaimed Mars Orbiter Mission. Today, she is heading a team to make indindigenousogress in optical sciences as a part of ‘Make in India’ initiative.

As a Deputy Director, Nandini feels proud to see the Mars Orbiter Mission on the new 2000 rupee notes. ISRO was her first job and she has stuck around for almost 20 years.

As a kid, when she drew inspiration from the revered Star Trek series, little did she know that she’d bag so much attention in this space. 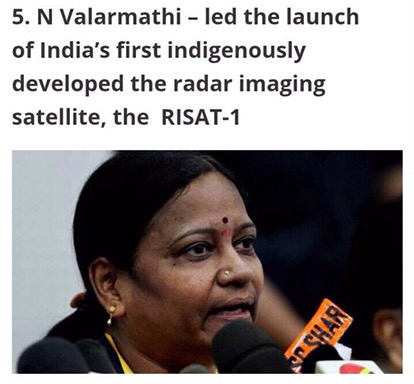 As the project director of RISAT-1 – India’s first indigenously-developed Radar Imaging Satellite Valarmathi is the first person to receive Abdul Kalam Award, instituted by Government of Tamil Nadu in honour of the former president Abdul Kalam in 2015.

She joined ISRO back in 1984 and has been involved in any missions including Insat 2A, IRS IC, IRS ID, TES. She is the second woman scientist of Indian Space Research Organisation (Isro) to head a prestigious project after T K Anuradha, project director of the GSAT-12 mission in 2011.

Minal, for two years, an engineer working on India’s mission to Mars, worked flat out in a windowless room, often for 18 hours a day, to be ready for the country’s most ambitious space project to date.

Before the propulsion of India’s Mangalyan in space, Mrs Sampath and all the researchers with her had abstained from taking any leaves, that too for over two years. 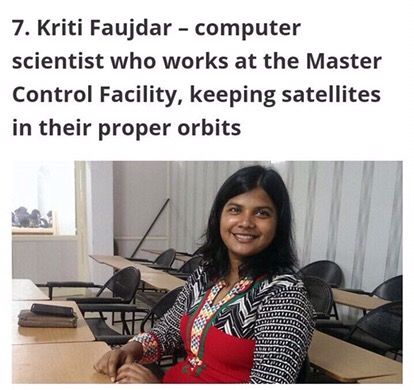 Kriti Faujdar finds ISRO a supportive place to work at for a woman – yet can’t help but notice that there are not many of them. She is part of a team that monitors the satellites and the several other missions continuously.

Born in 1963, an engineer and the Project Director for Agni-IV missile in Defence Research and Development Organisation, Tessy is is the first woman engineer to head a missile project in India. She is known as the ‘Missile Woman’ of India.

She works for the DRDO and not ISRO.

May these women continue to inspire all of us!

Credits: Parts of the above article has been reproduced from this Indiatimes piece. http://www.indiatimes.com/news/india/8-awesome-isro-scientists-who-happen-to-be-women-271697.html

2 thoughts on “India: The 8 ISRO women behind the 104 satellites launch ”