1993 was the first time, as a teen, I visited Madras (now called Chennai). Getting down from the train, I was shocked to find every Hindi signboard blackened all over the railway station, roads and city. Ditto Bangalore. It didn’t stop at that; Entire system was brainwashed to boycott Hindi. So, from the auto driver to the random shopkeeper, everyone would act as if they don’t understand Hindi and some would spoil your day further by adding, ‘When in South India, only talk in local language’. I continued facing the same jibe, occasionally, as late as Dec 2013. Truly, I have never felt as foreigner in any city of the world, as much as I have been made to feel at Madras, Bangalore & even Kerala.

Later I learnt, aside Hyderabad, it’s best to only communicate in English in South India Tier 1 & Tier 2 cities. There has always been a strong reluctance to Hindi knowledge. English was lucky. Everyone forgot to protest when the colonial language was getting imposed – maybe as it was getting jobs and take closer to their dream of settling in America.

To North Indians, anything south of Uttar Pradesh is South India filled with Madrasis who only eat Idly & Dosa. So wrong. Bollywood has been painting caricature image of South Indians, for decades. Wrong.

To South Indians, anyone staying north of Andhra Pradesh is a North Indian. So wrong. Southie movies often paint a caricature of Punjabis. Wrong.

There is mutual dissent and bias towards each other. It starts with mocking respective attitudes to life, skin colour, diet preferences and almost anything and everything that can follow. When I feel scared walking alone in Delhi on winter nights, I wonder how an average South Indian would be coping up there.

Me and my ten odd Loyola school friends, back in 1993, were verbally abused by MM Travels staff (outside the then Bangalore railway station) as “You bloody North Indians, go back to your North India. This is our South India”. We weren’t even from North India. Last I checked, Jamshedpur was still very much located in East India! Our mistake – We had just alighted after a strenuous 2.5 day train journey and were waiting in front of their shop at night 11pm, for our local friend to turn up.

Not much changed till date. In an online debate earlier this year, I was abused left, right and centre and told that the people (above incident) were ‘right to abuse you North Indians and kick you’. My only mistake – I had referred to their (debate participants) language as Kannad and not Kannada. When they corrected, I did rectify and wrote ‘Kannada’. But the anger and abuses didn’t stop.

Angry about something or the other

As with most Indian states, the South Indian states too are often tied up in frivolous controversies – specially Tamil Nadu. Last year two states were tense on Tamil vs Kannada natives residing on each other’s states. Earlier this year Tamil Nadu was fighting against banning Jallikattu. As I write they are fighting against a TV reality show ‘Bigg Boss’. So, for people who have excess excuses to fight, why give them an extra reason and end up being the common adversary. 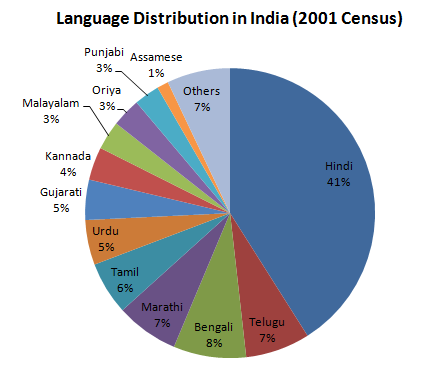 Imposition is wrong. Am a big protector of local language, customs, cuisines, culture and dresses. The centre isn’t wiping out local language either. Centre is adding Hindi signs to the English and local language signs already existing there. It can co-exist. So often in religion debates, liberals come out with the phrase ‘freedom of expression’. Well, the government has right to freedom of expression too. They can preach co-existence. The Narendra Modi led regime want the country to be united under certain common entities – outside cricket, religion and Bollywood.

Hindi stands the majority spoken language in India (53%). It’s signboards all over India helps Hindi educated tourists find way. Add to that, there are many languages which are very close to Hindi – Bengali, Gujarati, Punjabi, Marathi, Bhojpuri and Urdu immediately come to mind. Whosoever understand these languages will likely understand Hindi well. That’s more than 70% India population we are talking about now. But South India likely won’t bend to these theories. In a recent survey 89% of Bengalureans voted against this idea, despite the city having people from as many as 25 Indian states settled there.

So, why waste time and resources in spreading a language when the audience is least interested? If they want it, value it, they will work towards it. I recently read reports that Kerala is trying, in small steps, to up the Hindi knowledge. Till such time, the centre’s efforts are being interpreted as imposition. A common enemy is now seen and this could cost the NDA massive votes in 2019 Lok Sabha elections. So my message to the Centre is – Let them fight on their own Tamil vs Kannada or Big Boss or Jallikattu fights and save your vote bank and resources instead!

Disclaimer: Personally I hated Hindi. I was weakest in that subject in school and lost an academic year to my Hindi poor marks too. This decade I have been watching more South Indian films and writing reviews than Bollywood.