The last time Australia landed in India to play a series (barely six months ago!!) Maxwell mocked Virat’s shoulder injury, Jadeja and Wade got involved in a slanging duel, Smith called Vijay a ‘cheat’, Virat caught Smith illegally seeking DRS review help from dressing room and Ishant Sharma mimicked Smith which made an unforgettable image. Diwali is arriving a second time for Indian cricket fans this year and here’s a look at the on-field fireworks that these two champion teams have displayed over the last five years.

2. While globally the scoring run rate amongst all nations in last five years average to 5.33 in ODIs, it shoots up to 6.33, when these two teams play each other.

3. So if you exclude one of the No Result games, then in the last 13 games played between India and Australia, the team batting first has piled up >294 runs in all but one game!

4. Totals of 300+ have been chased down six times in this period.

6. 181 sixes have been hit between these two teams over the last five years, averaging over 7 sixes per innings! Expect more of the same!

7. 22 centuries and one double century have been scored between these two teams over the last 14 games. That’s nearly one century per innings, considering out of these 28 innings, 3 innings were washed out.

8. With Shikhar Dhawan opting out for first three upcoming ODIs (due to his ailing wife), Yuvraj Singh and Suresh Raina failing Yo-Yo fitness test and selectors faith, the team will not have any specialist left handed batsman in the lineup.. for the first time in nearly two decades.

9. Ravichandran Ashwin and Ravindra Jadeja are being ‘rested’ or ‘rotated’ is what BCCI makes you believe. It cannot be rested as Ashwin is plying his trade (good decision) in UK County Cricket and hence the idea of dropping them based on recent performances, is a great idea. 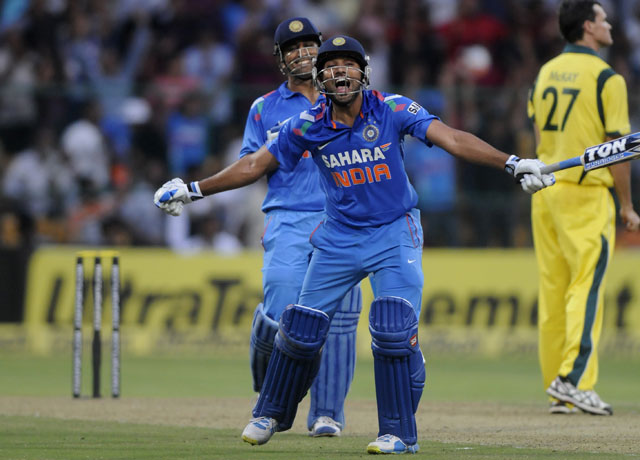 My starting XI for the first encounter at Chennai will be:

Pacers – Bhuvaneshwar Kumar & Jasprit Bumrah (Both have been too good in recent past to consider Shami or Yadav. Bumrah was the Man of the series in Sri Lanka and has not bowled a single ‘no ball’ since THAT game!)

All the best to both teams; expect a fire cracker of a series!