When Devgun thunders these lines, a chill runs down the spine, heart beats heavy .. as the Maratha warriors go about rock climbing in an attempt to win what seems an against the odds battle. They climb like leopards in pitch darkness, slither through the enemy castle alleys like snakes (reminds of a scene from Uri), float like butterflies and pounce like lions. In yet another attempt to raise awareness amongst citizens, following Chhapaak, Bollywood gives us its best 3D movie yet. Over the last five years, movies on Indian war heroes, nationalism and social issues have hit some peaks. Things Bollywood should have started doing from 1947…but cannot blame them … they had no idea subsequent governments and bodies like NCERT will fail us all so bad, and so hard.

The best 3D movie from Bollywood

The accolades and kudos will go to the Devgun family and Saif Ali Khan but the real heroes of this film are the technicians. Tanhaji is a visual delight and its use of mountains to enhance the 3D experience is unparalleled. Cinematography, camera work, sets, prosthetics and editing are all phenomenal. Watching a red turban head-geared Devgun standing on the edge of a mountain with the sword by his side, in itself, gives goosebumps. The final battle has been shown stylishly and its credit to the overall product that at the climax, one is at edge of his/her seat.. without a clue who is going to win the battle.

Blame it on our history books for this conundrum too. As a student those fat books never took us into lives of any Indian warrior in any detail. Our history books are filled with glorification of the Mughal dynasty; giving Indians a meek, accommodating, slave like image and the only time you feel proud through GandhiJi’s non violent movement – you realize the global respect and accolades that he has received from first world countries …  those very nations have got prosperity and richness by capturing, enslaving, looting, plundering other nations. Some irony.

The story of Tanhaji is an interesting one…at the end it was a Maratha warrior up against a Rajputana warrior (fighting for the Mughals). By picking this story, the makers did venture upon a touchy subject but the Indian public showed maturity by staying away from getting offended and making any needless protests. They realized the makers weren’t trying to make controversial statements and were just sticking to a story line. This is a story of one brave and able subedaar vs an angry and proud army general.

As Times of India review narrates the story “Under the Treaty of Purandar, Chhatrapati Shivaji Maharaj (Sharad Kelkar) surrendered 23 forts to Aurangzeb (Luke Kenny), including the Kondhana (now called Sinhagad), which was of strategic importance. Rajmata Jijabai (Padmavati Rao) swore that she would walk bare feet till the fort is recaptured by the Marathas. Four years later, Aurangzeb sends Udaybhan (Saif Ali Khan) with a huge army and a massive canon called ‘naagin’, to ensure that Chhatrapati Shivaji Maharaj cannot reclaim the fort. While Shivaji Maharaj plans a campaign, he doesn’t want to send his trusted lieutenant and dear friend, Subedar Tanhaji Malusare on the battlefield, as the latter’s son is about to get married. When Tanhaji gets to know of the ‘mohim’ (campaign), he implores Shivaji Maharaj to give him an opportunity to win Kondhana. His wife, Savitribai (Kajol) proves to be his silent strength. Despite the evil intentions of some like Pisal (Ajinkya Deo), Tanhaji manages to make inroads into the fort that is considered impregnable. A fierce battle ensues where Tanhaji fights the deadly Udaybhan.” 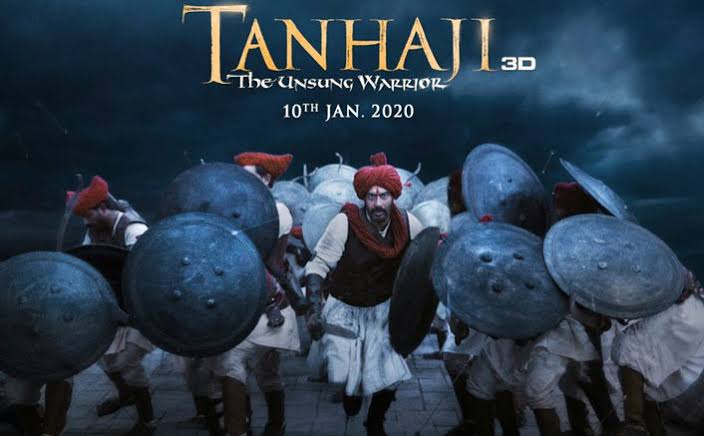 Ajay Devgun is excellent, Kajol Devgun as the lady trying hard to restrain her emotions is a pleasant watch, Saif Ali Khan is good – one can’t help recall Ranveer Singh in Padmaavat everytime we see Saif in black clothes – Sharad Kelkar and Luke Kenny look their parts, Neha Sharma’s pout has a guest appearance and rest of the support is fine.

Rating: 4/5 (Must watch, in 3D.. and Tanhaji has a repeat viewing value too..so watch again)

2 thoughts on “Movie Review: Tanhaji is yet another Bollywood History lesson that NCERT forgot to give”